On Tuesday 13th March 2018 the Chancellor Philip Hammond presented to Parliament the Office for Budget Responsibility's (OBR) economic and fiscal outlook, setting out their forecasts to the year 2023. The OBR's duty is to examine and report on the sustainability of the public finances. 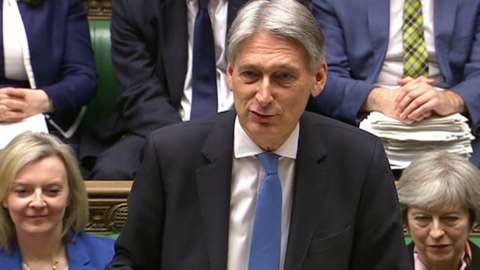 True to his word, the Chancellor announced no new fiscal policy measures in his Spring statement, following last November's 'first Autumn Budget', under the new Parliamentary schedule, designed to end tax announcements being made twice each year.

Relatively little time has passed since the November forecast and the outlook, for the UK economy and public finances, looks broadly the same. The OBR said the economy has slightly more momentum in the near term, related to the strength of the world economy, but they have not changed their view of the UK's growth potential, for the medium-term.

UK consumer confidence may have ebbed in February and the vote to leave the EU may have slowed the economy, but in the opinion of the OBR, this has been much less than expected. This is thanks, they say, in part to the willingness of consumers to maintain spending by reducing their saving.

The present backdrop of a generally stronger global economy has led prominent forecasters, including the Bank of England, to raise expectations of UK GDP growth for 2018, to between 1.5% and 2.0%. The OBR has followed suit.

Although concerns over long-term productivity growth, a casualty of the 2007/08 financial crisis, caused the OBR to downgrade the forecast of medium-term economic performance last November. The OBR's new GDP growth forecast is revised for the slightly better outturn in data for 2016/17 and is now tweaked for faster growth in 2018 (1.5% compared with 1.4%).

Critics suggest this weakening of UK growth, in the face of the world's recent accelerating economic growth, including the US and Eurozone, may be attributable to Brexit.

The OBR say the UK's performance broadly supports their forecast judgements made in November 2016, following the referendum vote to leave the EU. The OBR expected:

The big story for the OBR in November was the economic judgement to assume that potential productivity growth would be weaker in their forecast than previously assumed. This was a reflection of actual productivity growth since the financial crisis and the fact that this appears to be a global rather than purely domestic phenomenon.

The surprise since November is that productivity growth – measured as output per hour – has been stronger, through lower average hours worked. For the present the OBR believe this is owing to statistical error rather than reality. The same being true of a similar change in mid-2011.

The breakdown of the relationship between employment and productivity remains. Productivity growth has been much weaker than for decades before the Crash. Output per hour has risen by just 0.2% each year since 2008, compared to an average of 2.1% a year over the preceding 35 years. The pattern of unexpectedly strong employment growth and unexpectedly weak productivity growth continues as a consistent and constant feature of economic forecasts since the 2008/09 Crash.

The OBR conclusion is that there has been little change to the economy’s underlying growth potential.

In terms of the prospects for actual GDP growth, the OBR assess whether activity in the economy is running above or below the level that can be sustained without upward or downward pressure on inflation, which determines whether actual GDP will grow more or less than potential GDP.

In that respect the OBR’s measure of the ‘output gap’ is that the UK economy is running a little above potential, judging from the latest surveys of capacity and recruitment difficulties, and of stiffening wage settlements.

The caveat being the uncertainty in any measurement of an economy’s potential output.

Hence, owing to the unexpected strength of the world economy the OBR have revised their near-term assessment, but due to the suggested absence of capacity, cautiously believe that the medium-term growth potential is unchanged and that expected growth of the UK economy consequently weaker. This they expect to become manifest through lower growth in household consumption, in line with income growth, subdued business investment and neutral net overseas trade, from 2020 onwards.

Although the OBR have not changed any assumptions about the impact of Brexit on the UK economy, they have quantified the financial settlement or ‘divorce bill’ that was provisionally agreed with the EU last year. This settlement, they estimate, will total around £37 billion, in the middle of the range estimated by the Treasury.

Headline inflation decreased to 2.7% in February 2018 from 3%. The decrease was due to falls in the price of food, as a key driver of inflation, transport and restaurants/hotels, partly offset by increasing prices of clothing.

The fall in the value of the pound since late 2015 and following the EU referendum in June 2016 has caused higher import prices, which were probably passed onto consumers. The OBR now expects consumer price inflation to fall below 2%, in a year.

The current level of inflation, above 2%, is seen by the Bank of England as almost entirely due to the effects of higher import prices following sterling's depreciation.

In 2017, the UK’s exports of goods and services totalled £622 billion and imports totalled £651 billion; an overall trade deficit of £29 billion in 2017. The EU accounted for 43% of UK exports of goods and services and 54% of imports in 2016, resulting in a trade deficit with the EU of £80 billion in 2016 counterbalanced by a trade surplus of £39 billion with non-EU countries.

The Bank agree the contribution of import prices to inflation has probably peaked, which combined with a rise in nominal pay growth should support a recovery in household real income growth.

However, the Bank also share the view that there is little capacity in the UK economy and while interest rates are unchanged at 0.5%, the first increase in a decade having come in November 2017, many observers believe there is a good chance that rates will be raised at the next MPC meeting in May 2018.

Nevertheless, the UK labour market continues to grow, and confound. 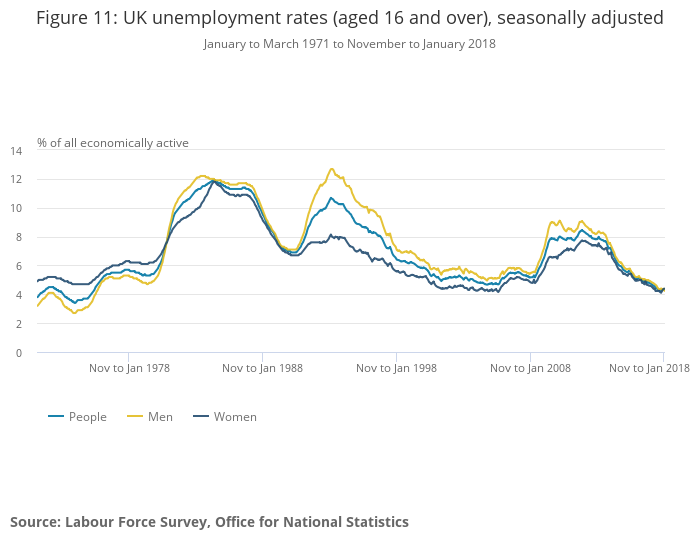 The UK unemployment rate is just below the rate of the US, below that of France, but above that of Germany. The UK rate of unemployment is the 9th lowest of the 35 OECD member countries.

Average weekly earnings were 2.8% higher in the three months to January 2018 compared with the previous year. There are signs earnings are starting to grow more strongly, with falling inflation this is relieving the recent ‘squeeze’. The Bank’s survey reported recruitment difficulties in 2017 and the average private sector pay settlement is expected to be just over 3% in 2018. 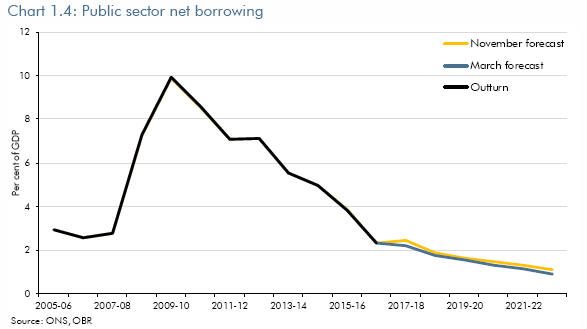 Annual borrowing by Government has fallen considerably since the high levels reached following the Crash. Borrowing has decreased from a peak of £153 billion in 2009/10 to £46 billion in 2016/17, equivalent to 2.3% of GDP.

Borrowing is now expected to be nearly £5 billion lower this year, then expected in November, at around £45 billion (2017/18).

The OBR attributes much of the forecast fall in borrowing between 2017/18 and 2022/23 to reductions in departments’ day-to-day spending on public services.

The OBR conclude that the economy and public finances have both performed somewhat better in the last few months than they had expected in November. Yet the medium-term outlook and the Chancellor’s room for manoeuvre against his fiscal targets are, they consider, little changed.

Although the OBR judged that the Government is on course to meet targets for structural borrowing, debt and welfare spending, meeting the Government’s overall objective for the public finances “looks challenging”.

The current looser fiscal mandate requires the Government to bring the structural budget deficit below 2 per cent of GDP by 2020-21. Over the past 12 months, the current budget has recorded a small surplus, but allowing for uncertainty the OBR see roughly a 65% likelihood of balancing the structural deficit based on current policy.

Public sector net debt, the stock of overall Government indebtedness, arising from past deficits, was equivalent to 85% of GDP at the end of 2016/17, a debt-to-GDP ratio not seen since the mid-to-late 1960s.