On Monday 29th October the Chancellor Philip Hammond presented to Parliament his Budget and the Office for Budget Responsibility’s (OBR) economic and fiscal outlook.

Although the OBR came under no pressure to change the forecast, preparation has been ‘unusually challenging’ with the Treasury not sticking to the agreed timetable, leaving a ‘small inconsistency’ with the OBR’s forecasts.

The big picture is that if the Chancellor had done nothing in this Budget, then the UK would be on course to have a small surplus annually of around £3½ billion by 2023-24. 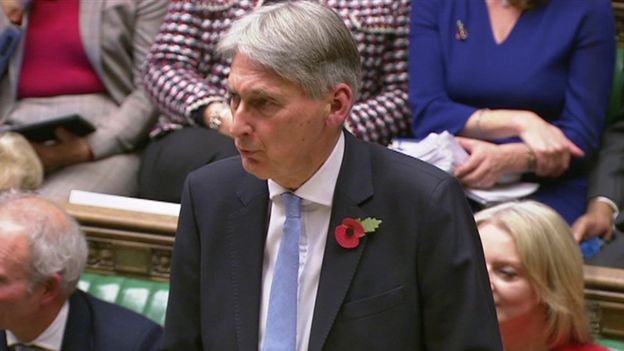 Yet the Chancellor decided to deliver in his Budget the largest discretionary fiscal giveaway, since the institution of the OBR by George Osborne in 2010, part of the then ‘emergency budget’. 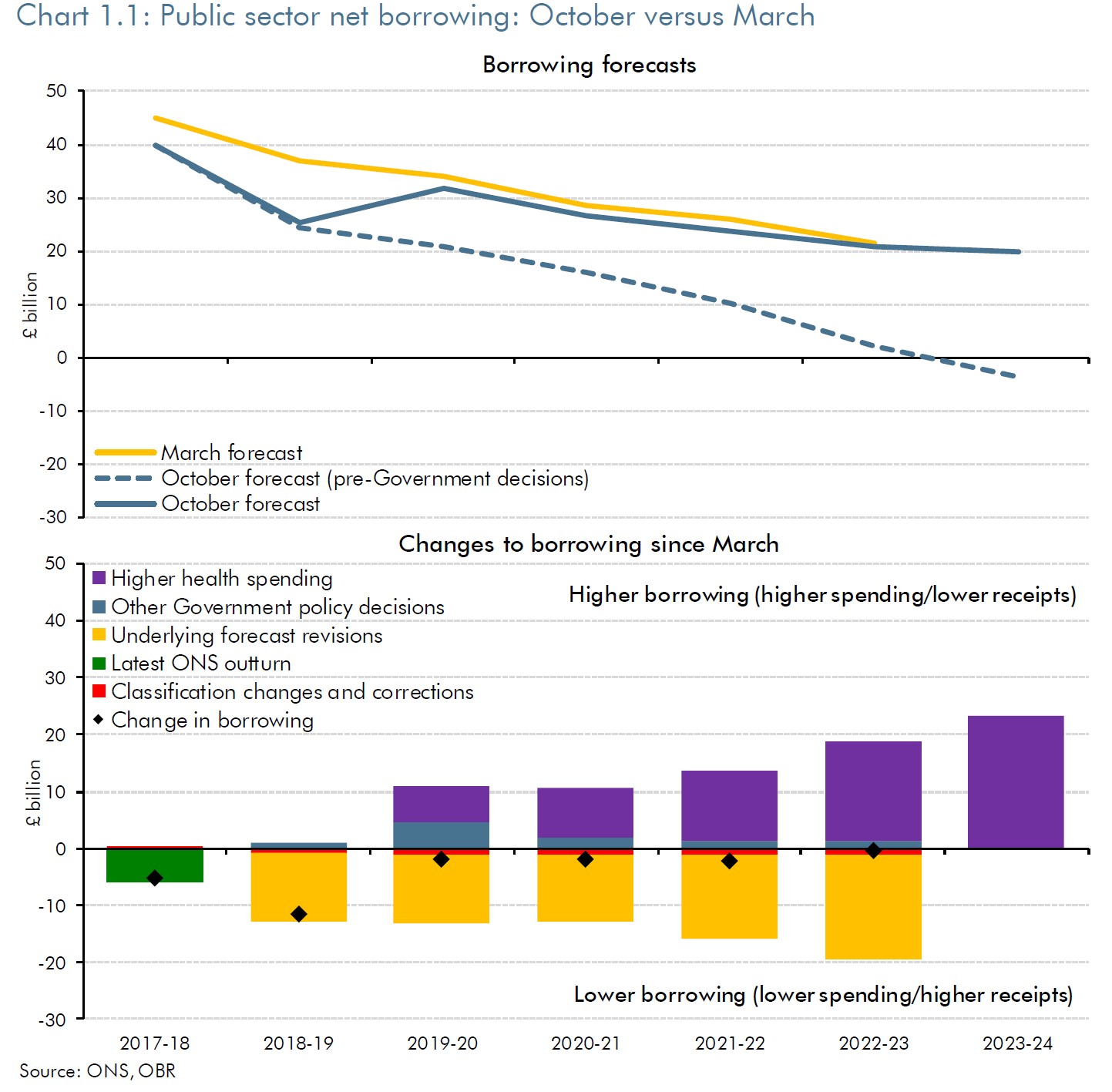 The outlook for public finances has improved since March with a lower than expected deficit between government income and expenditure. Borrowing has been falling quicker than expected. Consequently, the OBR have revised down their forecast for borrowing by around £12 billion. Public sector net borrowing has fallen from a peak of around 10% of GDP(£153 billion) in 2009-10 to about 2% of GDP(c.£40 billion) in 2017-18. A smaller deficit than the OBR forecast in March.

Furthermore, the OBR are more optimistic about economic growth over the next five years. Data suggests to them that lower rates of unemployment are sustainable. There is a significant improvement in the pace of deficit reduction.

The fiscal windfall has been spent rather than saved, mostly on health – indeed that announcement spent the windfall months before the OBR’s revised favourable outlook was known of, raising a considerable eyebrow over Government’s supposed credentials for parsimony.

This windfall has come about because the four major tax streams (PAYE, NICs, VAT and Corporation Tax) are outperforming expectations, together with lower than expected Government debt interest and welfare spending, through lower unemployment. According to the OBR local authorities have also constrained spending by increasing their reserves. 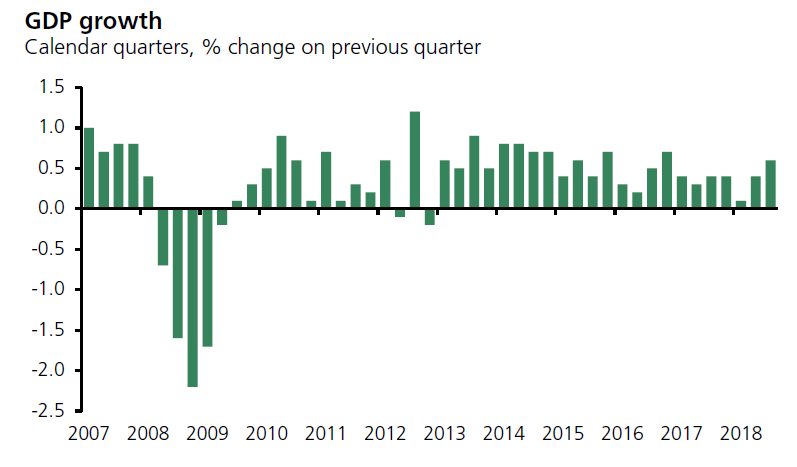 The OBR have revised up slightly forecasts for 2019 and 2020. The increase reflects the fact the OBR have reduced their estimate of the sustainable rate of unemployment to 4% of the workforce, because of continuing reduction of the jobless, which still has not prompted a significant pick-up in wage growth.

Labour market participation is higher than last forecast, which offsets a lower assumption in the OBR’s forecast for potential average hours worked per week. 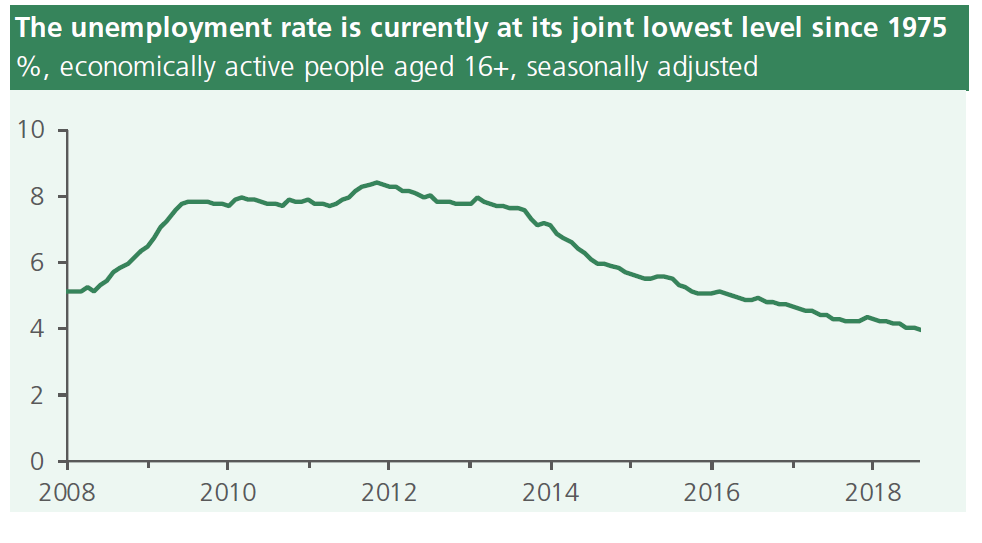 There are tentative signs of accelerating wage growth recently, which when combined with forecasts of lower inflation heading into 2019, may boost household incomes. The labour market remains strong with the unemployment rate at a more than 40 year low and the proportion of the working-age population in work is near a record high.

The rate of employment is very high by historical standards. In the three months to August 2018, there were over 32 million people in work, an increase of almost 300,000 from the year before (an employment rate of 75.5%) the employment rate has recently been at its highest level since comparable records began in 1971.

A continuing issue is that after adjusting for inflation, average earnings are statistically below the those recorded before the 2008 downturn. Growth in earnings is lower than inflation by 0.5%. This is below the levels seen before the 2008 recession, for example, real earnings averaging 2.6% in 2007.

Perhaps coupled, in some manner, with higher employment is lower productivity or economic output per hour, this rate is barely higher than at the pre-recession peak of late 2007.

The OBR say there is no meaningful basis on which to predict the outcome of the current negotiations over the relationship between the UK and the EU after Brexit. Accordingly, they have retained their broad assumptions on productivity and migration from previous forecasts, except that they assume the trading relationship will remain as it is now.

The OBR emphasise, the reasonable prediction, that a disorderly period after 29 March 2019 may have ‘severe short-term implications for the economy, the exchange rate, asset prices and the public finances’, but agree the scale would be very hard to predict, given the lack of precedent. Beyond the short-term, the issue of economic performance remains an open question.

Recent economic growth, below the long-term historic level, nevertheless supports the forecast over the next five years of 1.5% per year on average. Before the 2007-2009 financial crisis the UK economy sustained growth of around 2.5% per year. The main reason for the lower forecast continues to be poorer productivity growth: the key ingredient to sustainable economic growth. This remains weak since the Crash.